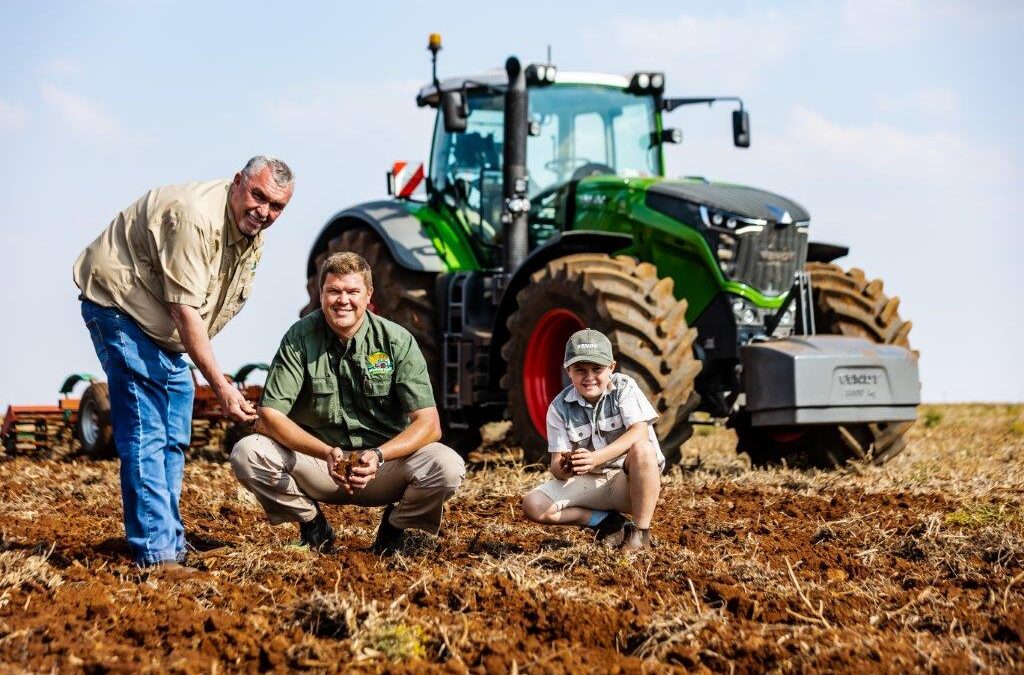 Johannesburg, South Africa, (Date) 2021: Modderbult Farming in the Balfour district has embraced precision farming from Fendt, using advanced features such as the Fendt Contour Assistant system for fertilising, planting, and harvesting. It is perhaps no surprise therefore that Dawie Brits (35), son of owner Pieter, has clinched the TLU SA Young Farmer of the Year 2021 title.

In addition to growing maize and soya beans on the 2 500 ha farm, Modderbult also has 1 000 head of cattle and supplies chickens to a major fast-food franchise, with four chicken sheds holding about 60 000 birds each. “I really do have a passion for grain farming, and the chickens just have to live with that,” Dawie tells TLU SA. He adds that his grandfather also farmed there, with his two sons already deciding to follow in his footsteps.

Father and son recently became the proud owner of a Fendt Vario 724, used mainly for land preparation, with a steady supply of fertiliser obtained from the chicken droppings. The Fendt 700 Vario Series is a versatile tractor series ranging from 144 hp to 237 hp that has been a staple of the German manufacturer’s product offering for many years.

The combination of strength, agility, functionality and comfort make it a reliable partner for a diverse operation such as Modderbult. What’s more, the Fendt Lane Guidance System can be configured to suit specific requirements, with the option to be able to choose from correction signals with different accuracy levels.

The major innovation of the Fendt 700 Vario series that sets a new benchmark in terms of technology is the FendtONE platform, which merges the machine and office into a single control unit. FendtONE combines tractor operation with a terminal for planning or control tasks, a function traditionally relegated to the office. 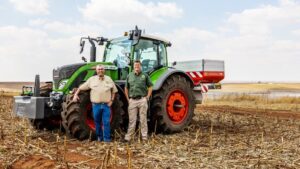 The Brits with the Fendt 700 Vario

Everything from field data to orders can be scheduled on a computer or smart device wherever the farmer is and transmitted directly to the machine. What’s more, the same onboard screen in the driver’s cab can be viewed as an offboard screen in the office or even while on the move. The end result is that entire work processes can be optimised for increased productivity and machine uptime.

As well as the new standard 12″ terminal on the armrest, the large 10″ dashboard is now also digital. This means that, in addition to regulation-compliant road data, machine-related information can also be viewed while in the field. For extra display space, the 12″ roof terminal can be used.

The FendtONE driver’s workstation is notable for its functionality and customised options. With its ergonomic shape and position on the armrest, the joystick can be held in a relaxed position all day long. Familiar elements include the auxiliary control units and headland management. The joystick also has freely-assignable buttons to give the driver even more flexibility.

Modderbult also has a Fendt 1050 Vario (Which is hitched to a 24-row planter) hard at work. A Fendt 1042 Vario was swopped for a Fendt Vario 1050 Gen 3 (Which is hitched to a 12 row planter) with a FendtONE cab, delivered back in March of this year. The main benefit of the Fendt 1000 Vario series is that it always runs within the maximum torque range for the lowest specific fuel consumption, which translates into high power at low engine speeds. The Fendt iD low engine speed concept means permanently low fuel consumption in addition to an extended service life.

Signifying the continued success of the Brits’ farming operation, Pieter and Dawie have a Fendt IDEAL 8T combine harvester with a maize and soya header on order, anticipated to arrive in March 2022. The new Fendt IDEAL series features a unique helix threshing unit and separating system for excellent grain quality and efficient acreage capacity to ensure a perfect harvest. 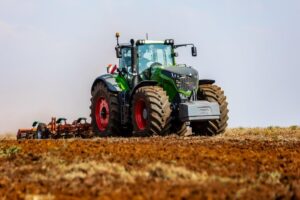 While father and son have taken full advantage of all the benefits and innovations offered by Fendt technology, farming is as much a passion as it is a vocation, as testified by Dawie’s recent accolade. He tells TLU SA that he was as giddy as a schoolboy upon learning he was its Young Farmer of the Year 2021.

The title also vindicates his decision to join the family business three years ago, after he became a pilot when his father attempted to dissuade him to follow a different career path. It is clear that Fendt’s mission is to innovate. Together with the determination of the Brits’ family to make Modderbult their legacy, it is a perfect example of a successful partnership between the dealer and farmer, aiming to grow South Africa’s agricultural industry and ensure food security for all.

For further information about TLU SA and the Young Farmer of the Year, visit: https://www.tlu.co.za/en/.

In support of the farming community, Fendt has a nationwide dealer network covering the whole of South Africa, offering service, sales and support. For further information, and to get in touch with your closest dealer, visit www.fendt.com/za.