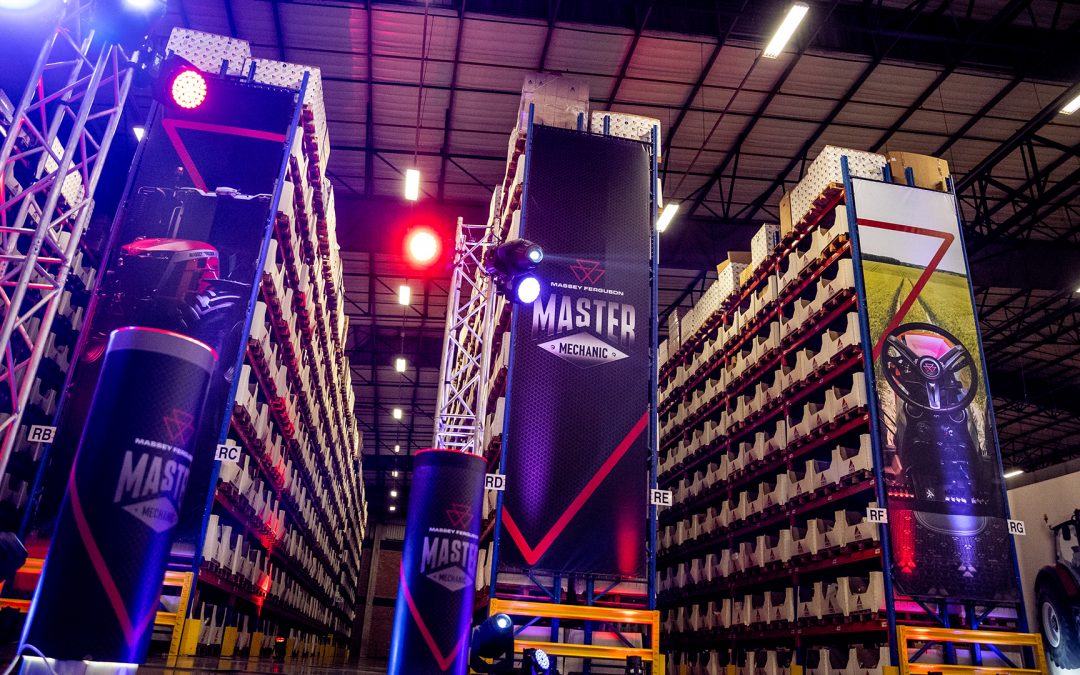 Who will you root for in the Massey Ferguson Master Mechanic Season 2 in November? Bigger tractors, bigger challenges, bigger everything!

The time is fast approaching for the Massey Ferguson Master Mechanic, with Season 2 to be released on 18 November. Returning in an even bigger and better format, the world’s first tractor-based reality show will feature super-sized challenges to showcase the highly motivated and trained Massey Ferguson technicians throughout the country.

Master Mechanic provides a unique glimpse into the technicians’ world of fixing tractors, who not only swing spanners and travel to amazing and different places, but use their intellect in conjunction with world-leading technology.

Following the huge success of the world-first Massey Ferguson Master Mechanic challenge in November 2021, the reality show returns in an even bigger and better format. “Season 1 of the world’s first tractor-based reality show was an incredibly successful journey that was wonderful to share with the world,” says Dr Dominik Reus, Managing Director Africa, AGCO.

“The life of a technician has changed in recent times with the advent of computers and being connected to the internet. Being a Massey Ferguson technician is filled with adventure, as well as continually learning and being afforded new opportunities. It has now become something special to talk about with your friends around the braai, and with family and people you come across in your life,” says Dominik. 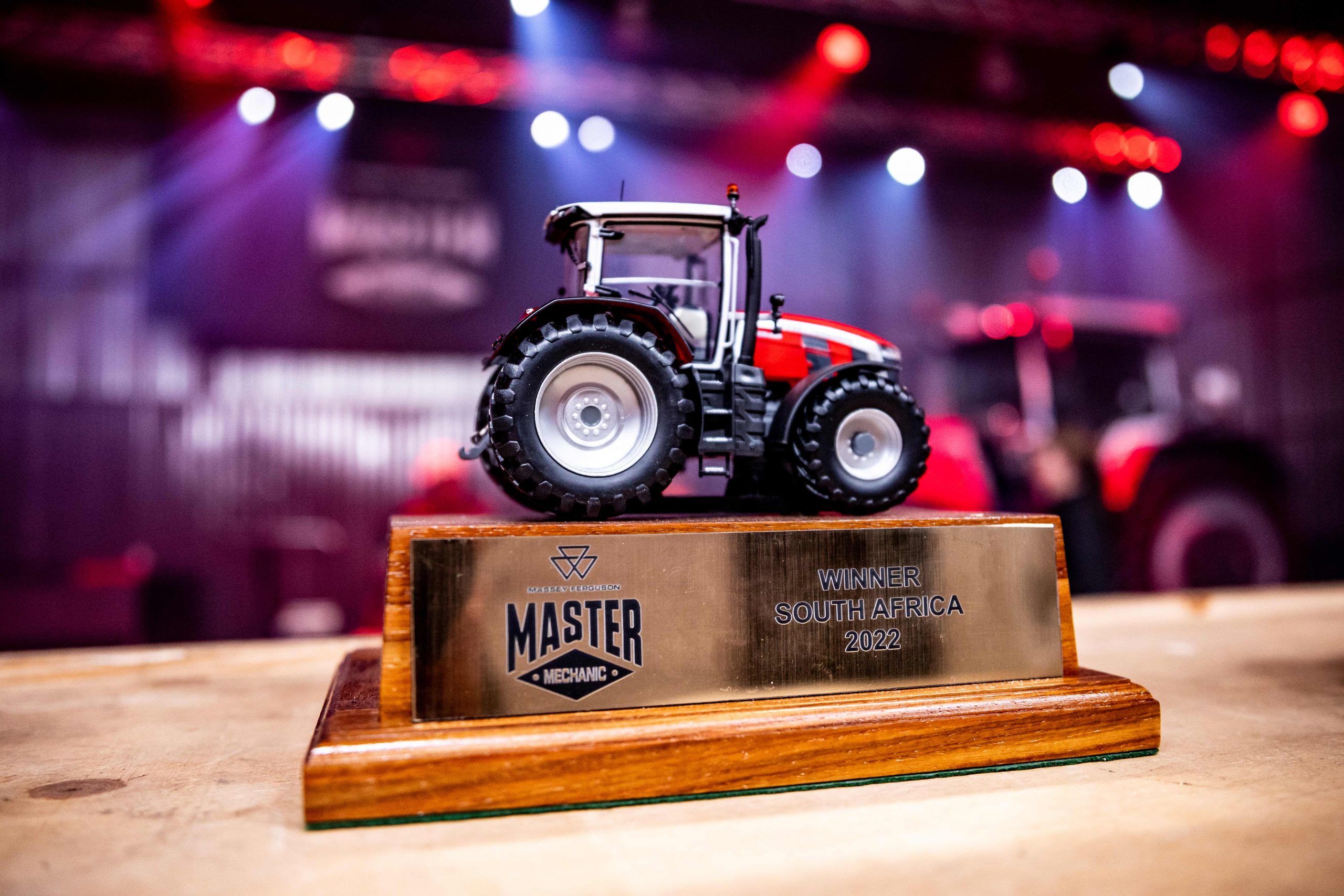 Entries for Master Mechanic Season 2 closed in mid-August 2022, with filming of the reality show in September and being released on 18 November 2022 on MF Master Mechanic YouTube and Facebook, supported by all major social media channels. All episodes will be released at once for viewers to binge watch.

Six technicians will compete in three teams of two (red, black and grey) for a R100 000 grand prize. The winning team will also be afforded a once-in-a-lifetime opportunity to visit and train at the Massey Ferguson Beauvais factory in France, where the Massey Ferguson high horsepower tractors are manufactured.

Season 2 will focus on built-in technology in MF high horsepower tractors, and demonstrate how farmers can utilise the technology and features to their full potential, which indirectly benefits their bottom line. This season will also feature super-sized challenges to showcase the highly motivated and trained technicians throughout the country. 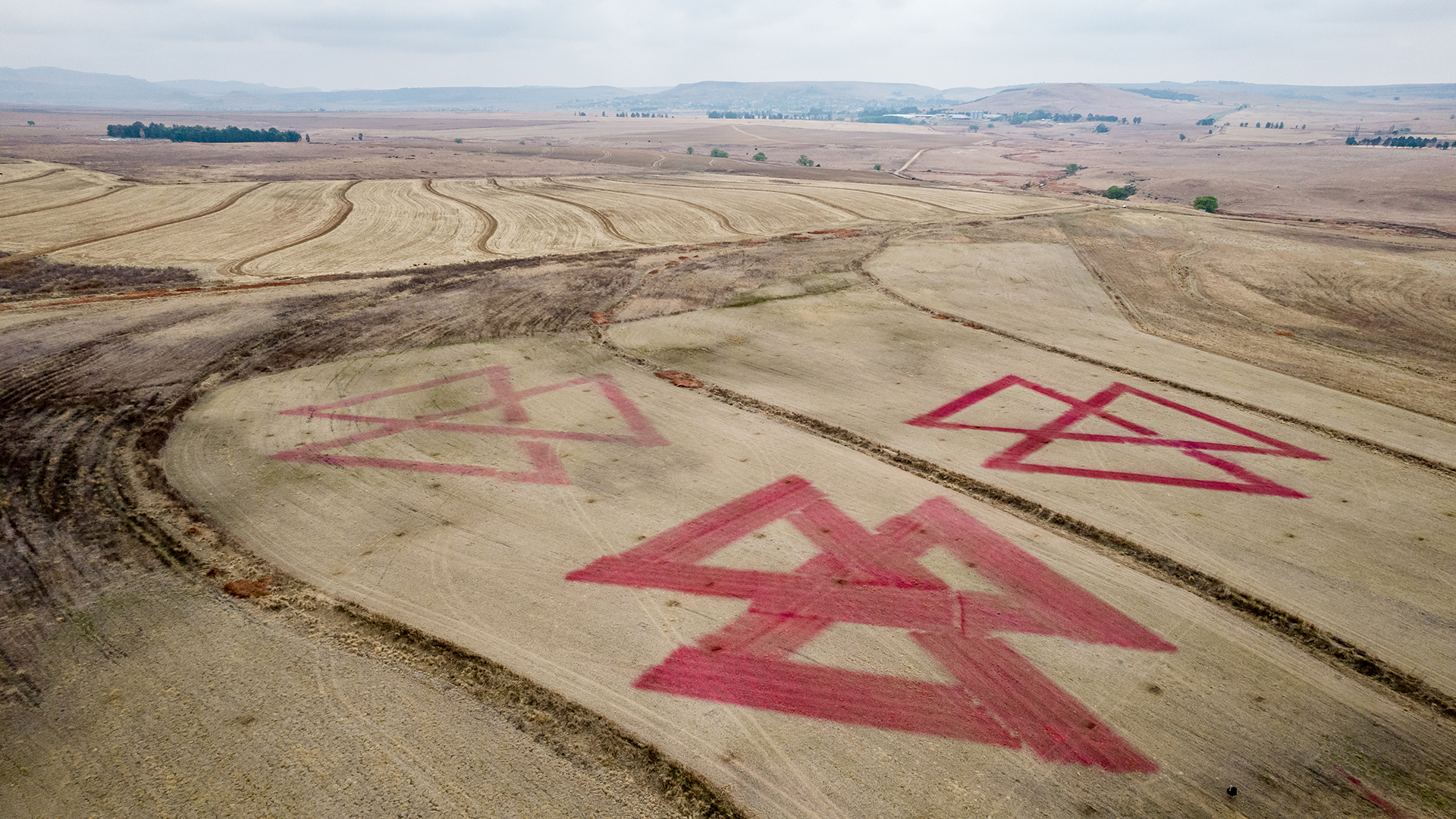 Last but by no means least, Massey Ferguson offers world-class technical training to its technicians, hence the confidence to showcase the capabilities and expertise of MF high horsepower technicians countrywide.

The team selection will be announced in the first episode of four. The epic final challenge will see the teams attempt to successfully replicate a giant version of the iconic Massey Ferguson Triple Trian­gle logo by means of a MF 8S equipped with a 2 000 litre Eco Ranger sprayer with 12m booms and eight sections, spraying at 450 litres per hectare. Rate and section control are provided by the Massey Ferguson 8S OEM Data Tronic 5 screen, linked to the ISOBUS Liquid control system. 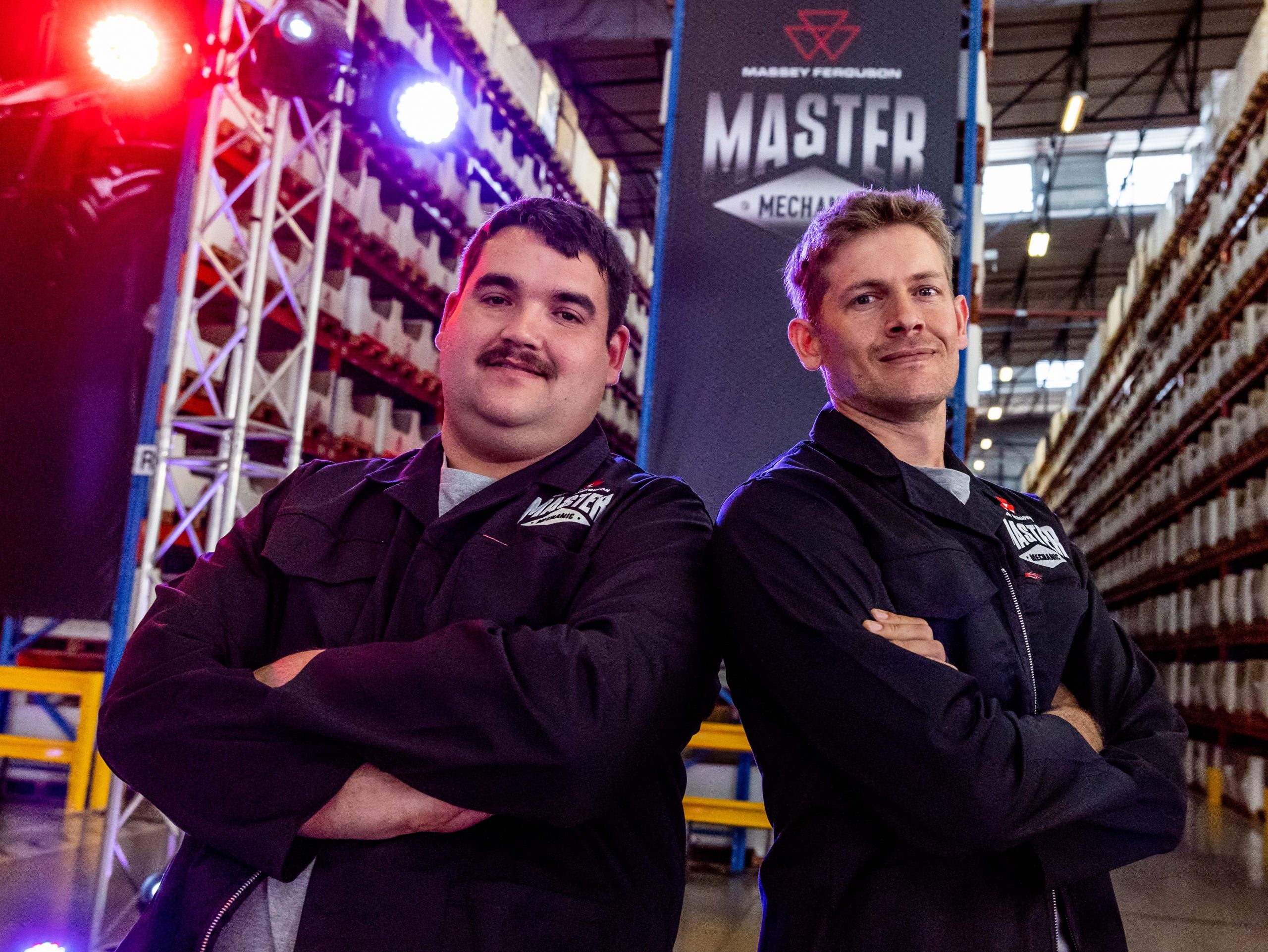 Hoopstad in the Free State has two contenders from the BHBW dealership, namely Lodewyk ‘Lood’ Wiid and his apprentice (soon to be qualified techni­cian) Caleb Webster. Caleb insists he has red blood like Massey Ferguson, which has a superior DNA.

“MF has brought out the best in me. It is a great honour to be selected to represent the Massey Ferguson ap­prentices in this challenge. I am here to show the world what youngsters can do, especially with modern tractor technology,” says Caleb.

Lodewyk says: “I consider myself among the best in South Africa. What makes me among the best is simple: I understand that learning is an ongoing process. The more I am open to learning and sharing my knowledge with others, the more I have a receptive mind to deal with complex problems with simple solutions. I have come a long way since I was a little boy learning about tractors. I am ready to show South Africa and the world what I am made of!” 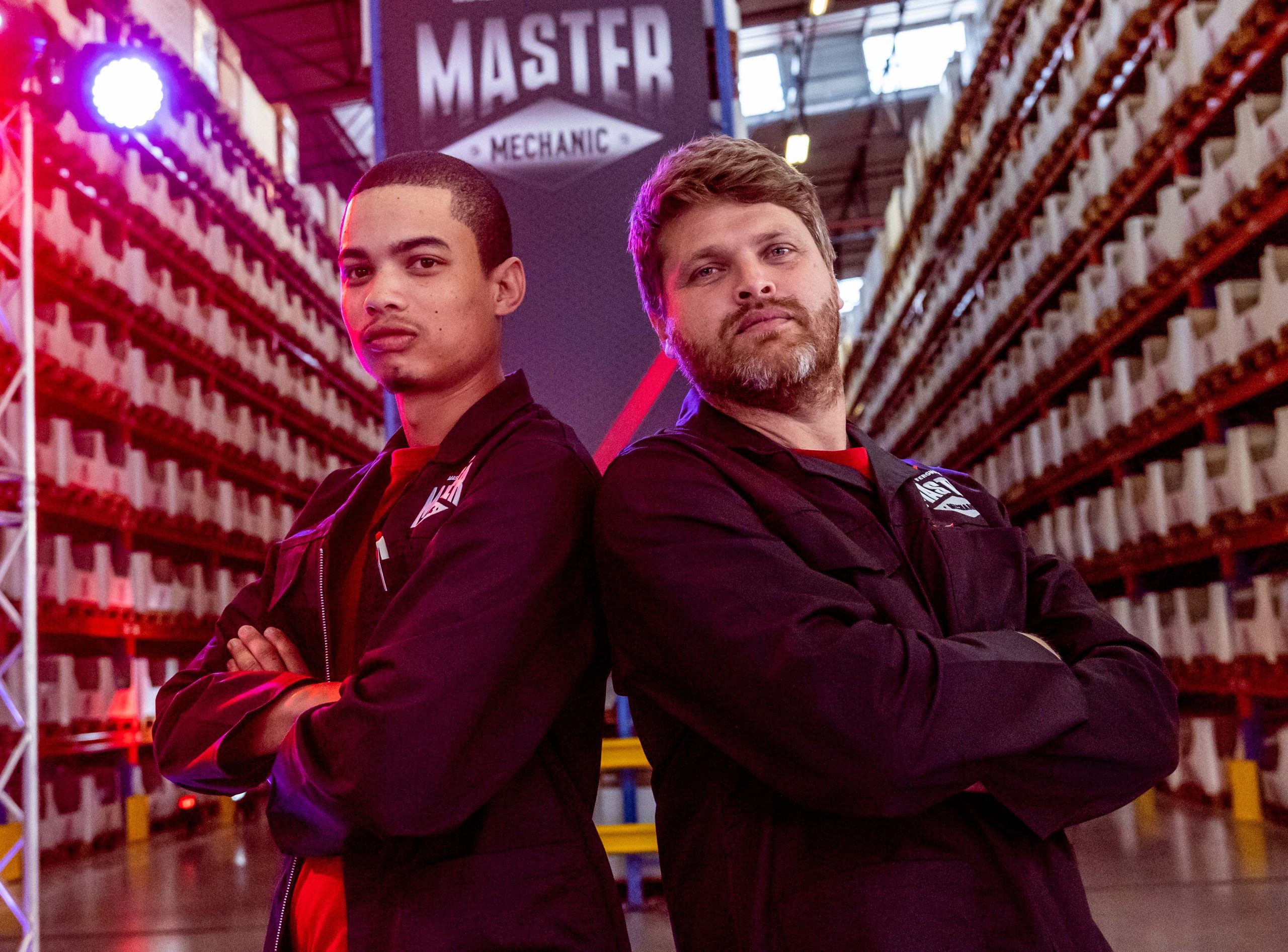 Gqeberha in the Eastern Cape is ably represented by Francois Beer from Beer Trekkers, who declares he can fix any high-horsepower MF tractors. “Growing up on a farm and now being in a farming business enables me to understand both sides of the spectrum – from the farmer’s perspective to the importance of offering best-in-class product support. My 15 years’ experi­ence as a mechanic and the ongoing training I receive have prepared me for this challenge.”

Filter Dienste in Bethal, Mpumalanga, is proudly represented by Jacques Du­venage, who says: “I get so much joy solving challenges. I get to learn new things all the time and apply the knowl­edge I gain to solve the next challenge as effectively. I enjoy working with the MF tractors. I know I am up for the Master Mechanic Challenge as I under­stand diagnostics and technology.”

Flying the flag for the Free State is Nico-Ann Jansen from BHBW Bothav­ille, the only lady in the competition. “I know I have something special to contribute, and I am determined to make that mark. I am a perfect fit for this competition because I mostly worked on high-spec Massey Fergu­son tractors. Every day I push myself to acquire new skills and face new examinations of my abilities. I gasp with DE­LIGHT when I get the machine back into operation and experience that sense of relief from the farmer. 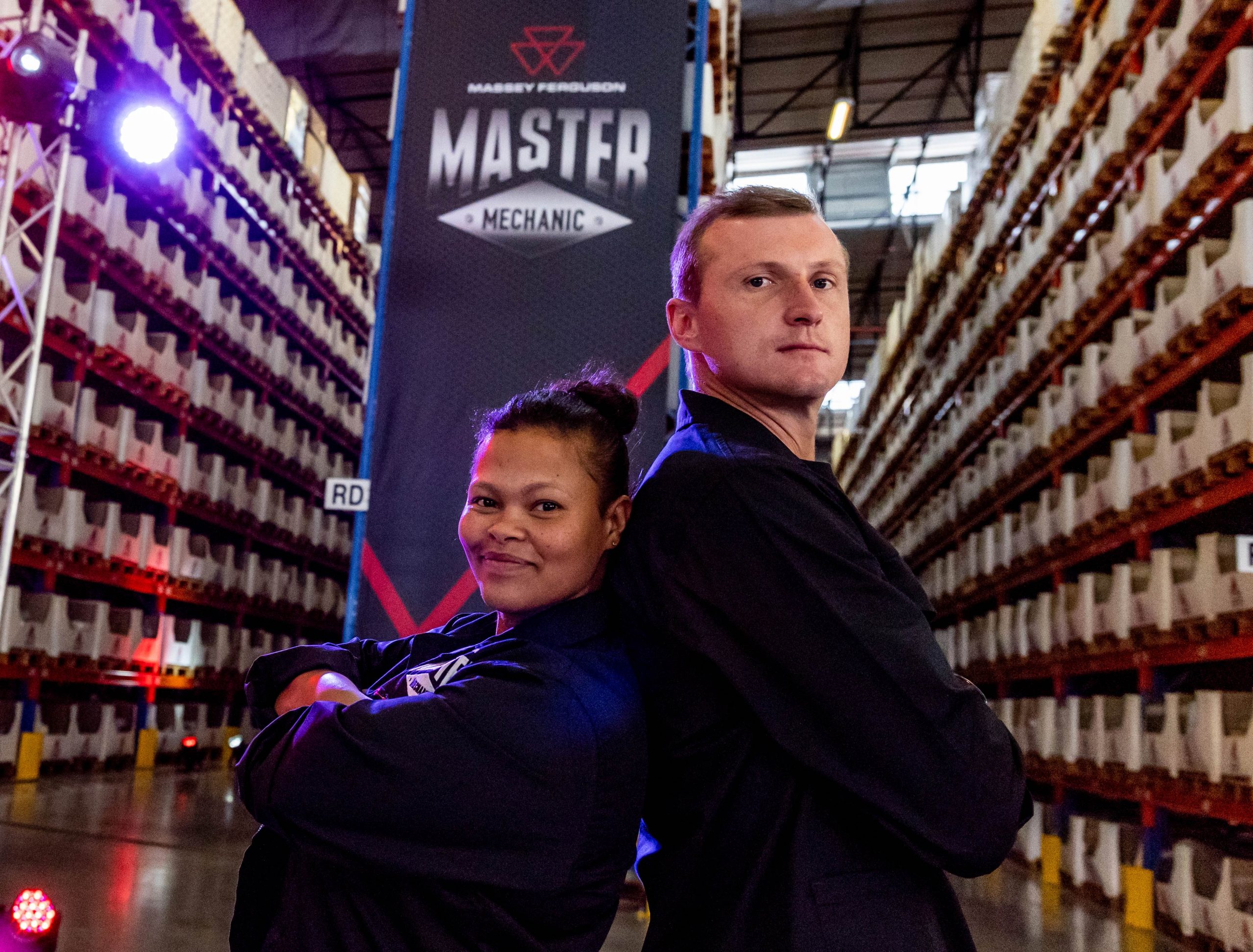 Last, but by no means least, Stiaan Redelinghuys from Hennie’s Trekkers in Malmesbury, Western Cape points out that he has been working on Massey Ferguson tractors for the past decade. This means he has a wealth of experi­ence that will stand him in good stead in the competition. “I am a man of few words. The work I have done speaks for me. What is more, I have never lost a No13 spanner!

Master Mechanic Season 2 will be released on 18 November on MF Master Mechanic YouTube and Facebook channels. All episodes will be available at once for viewers to binge watch.

Master Mechanic is designed and filmed in such a way that anyone can understand, together with some special items for those ‘seasoned’ technicians to enjoy. It is filled with all the emo­tions, drama, and suspense one would expect from a world-class reality show.

This year Massey Ferguson, a worldwide brand of AGCO (NYSE:AGCO), is excited to announce a fresh look for its iconic Triple Triangle logo and its new ‘Born to Farm’ brand identity in celebration of its 175th anniversary. MF has offered farmers around the world straightforward and dependable machines since its inception. Few global brands can claim such a lasting impact in the agricultural industry.

In support of the farming community, Massey Ferguson has an extensive network of over 35 dealers covering the whole of South Africa, catering for parts, service, aftersales and new sales. Potential customers interested in the MF range can obtain all information from www.masseyferguson.co.za. Upon completing the contact form, potential customers will have the video, brochure and dealer contact details sent to their WhatsApp and email within 30 seconds.

About Massey Ferguson
Massey Ferguson has built up 175 years of global experience in manufacturing for the agricultural industry. It produces a full line of both high and low horsepower tractors, and has factories in China, Brazil, India, Europe, and North America. Massey Ferguson also has a wide range of implements and combine harvesters. It has an extensive and established dealer network in South Africa and an extensive distributor network in Africa.

ARTICLE WAS FEATURED IN THE FOLLOWING PUBLICATIONS / WEBSITES: